Because I knew nothing about parenting and had spent very little time with children before I had children of my own, I made the mistake of saying, aloud I might add, that I would love my children unconditionally. Smart or not, funny or droll, gay or straight, no matter what, I said, I would love those children. “Even Jeffrey Dahmer’s mother still loved him,” I once said to myself. And so I vowed to love my kids no matter what, or who, they turned out to be. This was the stupidest thing I ever did.

When my son was two he entered the push things phase where kids just want to push things like mini shopping carts, little plastic cars that take moms over 400 hours to put together, and tiny strollers meant for dolls. The kids aren’t actually pushing their cars or shopping carts anywhere. They’re just pushing it for the sake of pushing it. For some reason, that’s fun.

RELATED:  Why Are You Holding Your Penis?

A little girl named Julien lived up the street. One day she walked by our house, deep in her own push things phase, pushing a mini pink stroller with a doll strapped in, 5-point harness and all. My kid saw this and immediately requested one of his own. I was cognizant of his push things phase and so I immediately ordered a mini stroller just like Julien’s.

When the package arrived, my kid nearly accosted the UPS man and tore through the box to reveal his tiny pink stroller, which he then pushed around the block for hours on end. It wasn’t until a neighbor stopped me and asked, “Has your son’s father seen that stroller?” that it occurred to me that to some, a pink stroller for a boy was a total no-no. To me a color was, and is, just a color. It didn’t come with a gender attached.

My husband, too, could have cared less. The woman seemed to imply that by my son’s pushing a pink, rather than boyish blue or black, stroller, he was on the fast track to growing up gay.

But we didn’t, and don’t, care if either of our kids grows up gay. I had vowed to love my kids unconditionally. My son could push his pink stroller to his heart’s content. He was going to be loved.

A year or so later, my son entered what I fondly refer to as the grey tank top phase. He insisted, in the middle of winter I might add, on wearing a grey tank top for one entire month. In his eyes, there was no other shirt in his wardrobe. And, there was no negotiating.

Because my only parenting philosophy is survival, I allowed the grey tank top phase to go on as long as my little one insisted. I figured if the kid were really cold he’d speak up, or freeze. We live in LA after all. Our best hope for a real winter is when the temps dip below 80 and we have to dig up garments with sleeves.

But, a mom at his pre-school had another idea. She insisted I was a boundary-less parent who was letting my kid rule the roost. “No,” I said. “I’m just not going to fight over a tank top.” Plus, I thought to myself. Who really gives a shit? Choose your battles. If he wants to wear a grey tank top, he can wear it.

The grey tank top phase ended just like the pink stroller phase. Those were replaced by other phases and behaviors like the tantrum years, the month he spoke only in a British accent, the week my son insisted on speaking only in Minecraft terms, the summer he communicated only in mime, and the spring he decided he only liked his dad and that I was in his words, “bringing him down.”

There was the year he was sure he was a cat and the summer he pulled everyone’s hair. For three months he would only eat a sandwich, for breakfast. And there was one entire month when he yelled “Fire truck!” for hours in his sleep. And just this past summer, he walked around the house holding a writing book and pen while taking notes in preparation, for what he referred to, as his future as a top ranking spy.

Through each of his phases, his father and I have embraced and encouraged his curiosity, fixation, commitment, determination, belligerence, and stubborn-ness, while patiently waiting for each of his phases to end so another one could begin anew. And through each phase, the child was loved, unconditionally, even when he referred to me as “Mum” while asking for a spot of tea.

When I held that little baby in my arms for the first time and vowed to love him unconditionally, I never in my wildest dreams thought he’d ask, at nine years old, to wear a man bun.

It started out innocently enough, his hair getting longer. It was a simple case of logistics. I just couldn’t find the time get his haircut and I’m particular about who cuts his hair. My kid and I share the same hair cutter, part of my attempt to avoid my kid ever having a dreaded bowl cut. So he goes to my haircutter, which means an appointment is needed. An after school appointment, I might add, which is prime time for the 700 after school activities my kids have requested to do.

Plus, the truth is, his hair looks really good when it gets a little longer. His golden color catches the light and it’s gorgeous in a 70’s surfer dude sort of way.

I’d assure him he only needed a trim. I just needed to find the time.

But then one day as I was brushing my daughter’s hair before bed and my son, brushing his own just washed hair, asked for a ponytail holder.

“I want to put my hair back,” he responded.

“Huh,” I said before stopping myself.

“I’m going to make a man-bun,” he said with enthusiasm before realizing he’d need my hands for help.

I helped him put his hair back and, not shockingly, it looked good. His hair was at just the right length. He has a good face for it. It looked good. I told him so and so did his sister. He went to sleep with his man bun in place, which was actually more of a man ponytail on a boy so a boy ponytail, but the term man bun seemed to sit well with him and so I didn’t correct it.

The next morning he came down for school with his man bun in place. “I’m going to wear it to school,” he said.

I gulped, surprising myself that I wasn’t thrilled. It wasn’t the long hair with which I took issue. It was the thought of my son walking around like a Silverlake hipster who’s going to grow up to own an artisanal Kombucha shop and refer to himself as a brand. It’s bad enough we live in Los Angeles, I’ve thought to myself. We don’t need to live the cliché.

But, I try not to have separate rules for either of my kids based on their gender. Other than the basic biological fact that my son can’t be a girl and my daughter can’t be a boy, the options of the world are open to both. He can push a pink stroller. She can wear blue and play sports. And the world will be fine. They will grow up to be whom they are meant to be.

I just never thought that would include my son walking around with a man bun.

“You know buddy,” I said. “Some of the kids may tease you about your hair.”

I sent him off to school, man bun in place, sure I’d pick him up at the end of the day and he’d report relentless teasing and that he’d removed his ponytail by 10am. As soon as the kids got out of the car at drop-off, I called the hair salon and booked their earliest appointment for my kid. At the end of the day he happily got in the car, reporting that two of the girls had said that his hair looked awful, “But they don’t like anything I do,” he said and shrugged it off. “The boys thought it was great.”

A few minutes later he said he’d decided to wear his man bun everyday to school and hoped I wouldn’t keep the upcoming hair appointment. “Your hair is in your face bud,” I said. “It’s getting kind of crazy.”

But the truth is it wasn’t the long hair that bothered me, nor was it the fact that my kid was walking around like a Los Angeles cliché. What bothered me about the man bun was that my kid might get teased for it. He was proudly, confidently, and happily putting himself out there to be ridiculed and judged. I didn’t care when he was a toddler pushing a pink stroller, but it’s harder now that he’s bigger. It’s harder now because it matters. He knows better. He’s not an oblivious baby 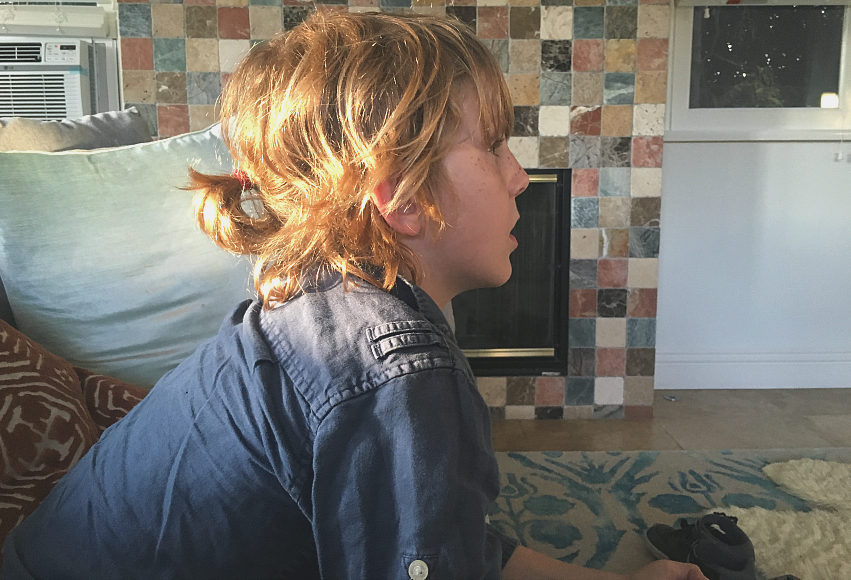 Later I cancelled his hair appointment, postponing it for one more week. He was happy with his hair and so I was going to be happy with it, too. He didn’t care who teased him, or if they did. He had the right attitude. He was loving himself unconditionally.

A week later, he finally got a haircut. It looks spectacular and I can see his eyes again. His man bun is gone, but I’m sure it will be back. And if it’s not, something else will. There are more gray tank tops, British accents, and man buns in my future as a parent. There are more phases, experiments, and good and bad choices all of our children will make. And there are more chances to attempt to love our children unconditionally through all their phases, even if it kills us.