I was once referred to as an organizational genius. Sure this came from a person who couldn’t find his shoes when they were tied to his feet, but you might say organization is my thing. It helps me prepare for the unknown and, in turn, not fear what I don’t know.

This skill has come in handy over and over in my life. The more organized a trip, the more relaxed a traveller I am. My workday is organized down to one-hour increments to avoid the inevitable I-just-spent-four-hours-on-Bella-Hadid’s-Instagram-and-now-I’ll-be-up-all-night-finishing-my-workday time suck that happens when I’m not on my organizational game. And parenting, 18 years of having no idea, parenting is best mixed with a bit of preparation and planning.

The problem, and you know this if you have children yourself, is that there is no way to properly prepare one’s self for raising other people. That’s because parenting involves other people. Little people, with minds, temperaments, illness and ailments, sleep patterns, and crafty ways of messing with your plans, of their own that make planning basically useless.

The real issue isn’t our children’s total lack of concern for what we as parents had in mind, it’s that there’s no way to possibly anticipate what kind of person you’ll be once you become a parent.

For every “I’ll never…” statement one says before having children from “I’ll never be a rigid parent,” to “I’ll never let my children change my lifestyle, they can just fit right in!” is a person who does exactly the opposite. There’s no way to know. Chances are, the person you are as a parent is pretty close to the person you said you’d never be before you were a parent.

That’s because parenting is the great lie detector test. It’s non admissible in court, but it does tell you who really you are.

Over the past few years, a number of my friends with children older than mine began sending their kids to sleep away camp. Justin and I are both big proponents of camp, we went ourselves after all, and had always assumed our children would go at some point.

This year, as Balthazar turned 8, he found out his best buddy from school was going to sleep away camp for the second year in a row. Knowing it was two weeks away from home, Balthazar still requested to go.

I was reluctant. Two weeks in my mind was a long time for an 8-year-old, though I went for the same amount of time at an earlier age. But Balt wanted to go, and we wanted to send him while the idea was his own. Plus, his best buddy would be there. What could go wrong?

The buildup to the first day of camp was dramatic in our house with Balt admitting he wanted to go, but that he was also really anxious about it. We worked through it and he got on the bus a happy camper.

“How are you doing?” a friend asked at the bus stop.

“Me?” I thought to myself. I had no idea. I had spent so much energy getting my kid ready, I hadn’t thought about myself.

See when all my friends were sending their children to camp last summer and the summer before that, they’d recount stories from the parenting front lines. There were private camp parent Facebook groups where parents could interact and spend their child’s entire camp session inducing anxiety in other parents.

There were letters from their camper, if they were lucky. Each letter written in handwriting that looked as though it had come from a serial killer writing hyierogliphics rather than the child whose homework his or her mother had slaved over the previous school year. Adding insult to injury, each camp letter seemed to include phrases like “I’ve cried every day” or, “I miss you more than life itself,” which was inevitably followed by, “but having a great time.”

And then there were the photos. There were daily camp photo uploads that mothers confessed nearly put them over the edge of sanity as they used skills worthy of a CIA agent to analyze the state of their camper’s happiness simply from each photo. I listened to my otherwise sane friends admit that they had lost sleep, even an entire night’s sleep, analyzing their child’s perceived happiness from the everyday camp photo upload.

And I will admit, I judged them. I judged them to the point of being dismissive. That’s because I wasn’t yet one of them. My kid hadn’t yet gone away to camp.

And then on Sunday, my first born, my darling, the love of my life, my 8-year-old son Balthazar boarded a bus driven by a person I assumed had been hired by the camp (though I never did ask), surrounded by a group of boys and girls I didn’t know, led by counselors I assumed had been background checked, and went away to camp.

He seemed happy when he  left, which made me happy. But, then came intel from the front lines.

Then came the camp photo upload.

At first, I figured they were just giving parents proof of life photos.  I was even grateful. 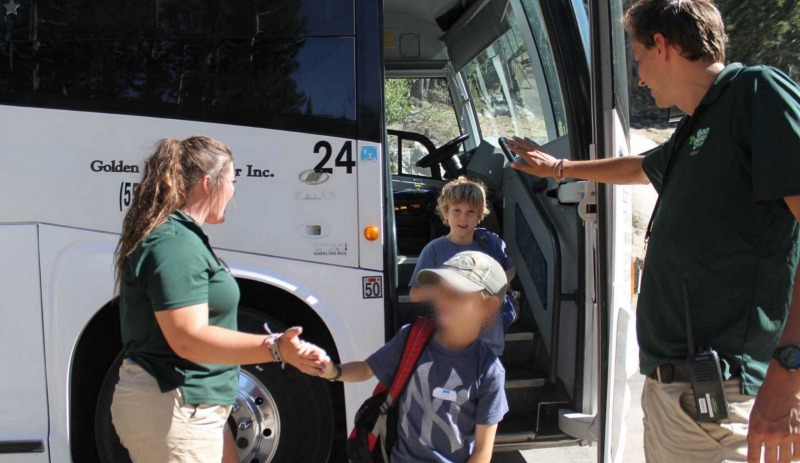 “Justin,” I shouted across the house as I opened the email containing the photos. “He’s alive. He made it.” Sure I noticed that my kid wasn’t really smiling, but I attributed that to the long bus ride. He made it safely, which was all that really mattered.

But, then I found myself returning to the photo.  I looked at the photo half a dozen more times as if it were a hologram that might start speaking to me. “Oh god,” I thought to myself. “I can’t become one of them. I’m not going  down the camp photo rabbit hole.  I won’t become a crazed sleep away camp mom.”

I shut down my computer satisfied the camp had let me know my child was indeed breathing by way of the bus arrival photo. Other than a letter or two home from my camper, which I assumed I wouldn’t get, there would be no more contact from camp unless something went wrong. I could stop looking at his photo wondering if he was having fun and move on.

And I did, until the next day.  A friend, whose child is also at the same camp, posted a fabulous my-kid-is-waterskiing photo and so I logged in to the camp’s website to see if there might be another photo of my kid.  There was. 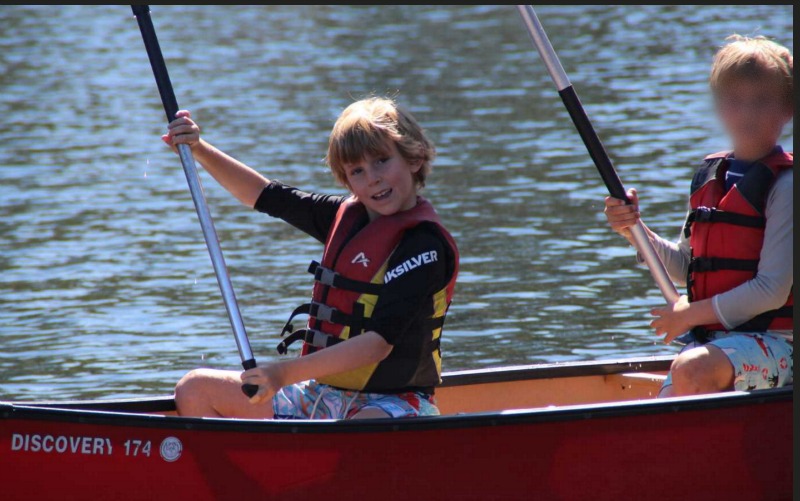 Lovely, but then I saw the next photo. 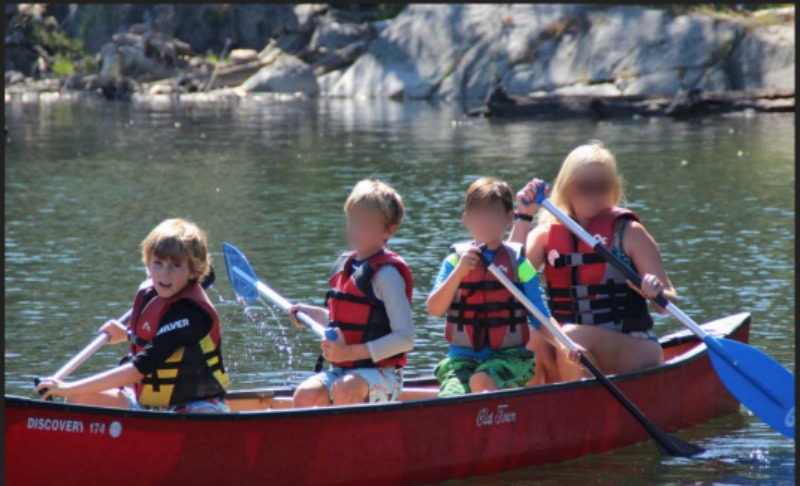 He looks like he could be unhappy. The next picture sealed the deal. 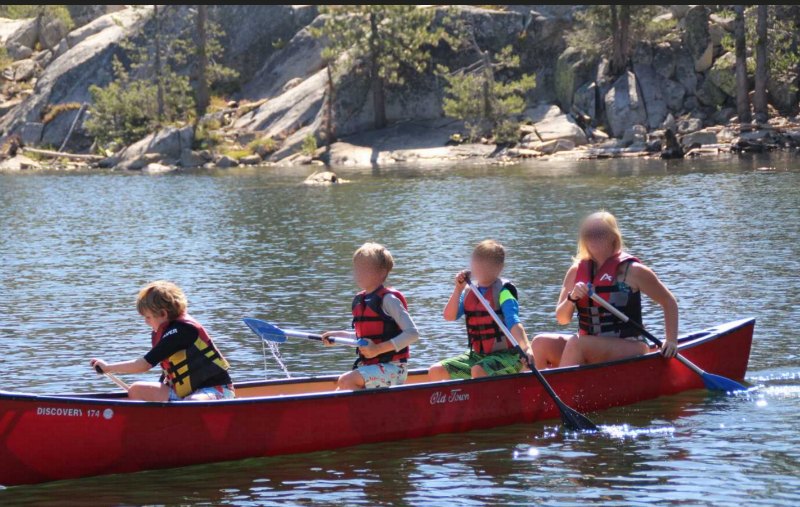 You see a child rowing a canoe. I see a child who is looking away because he is probably crying and doesn’t want anyone to know.

I took a screen shot of the photo and zoomed in until my eyes bled. I considered calling the camp. Instead, I stress ate a bag of chips.  I braced myself for the inevitable call from camp saying my son was inconsolable and I should come get him. The canoe ride was just too much.

Later that day, I checked back in to the camp website to find a photo of my kid at the lake. 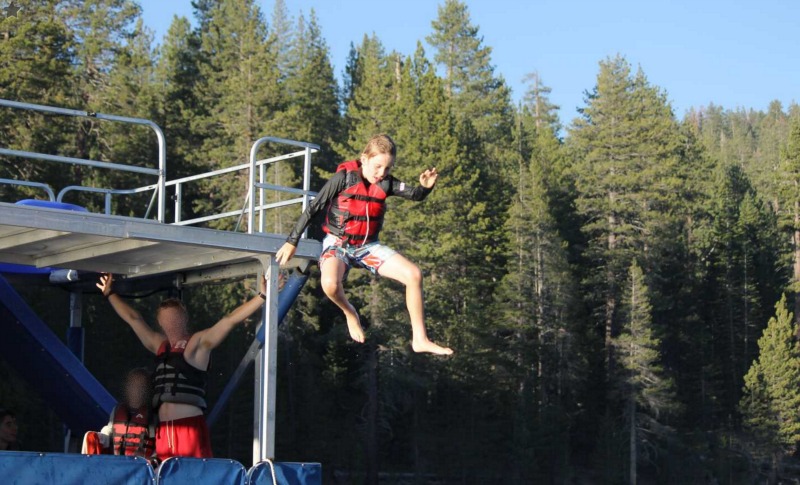 Jumping off a pontoon looks fun, but then came the next photo. 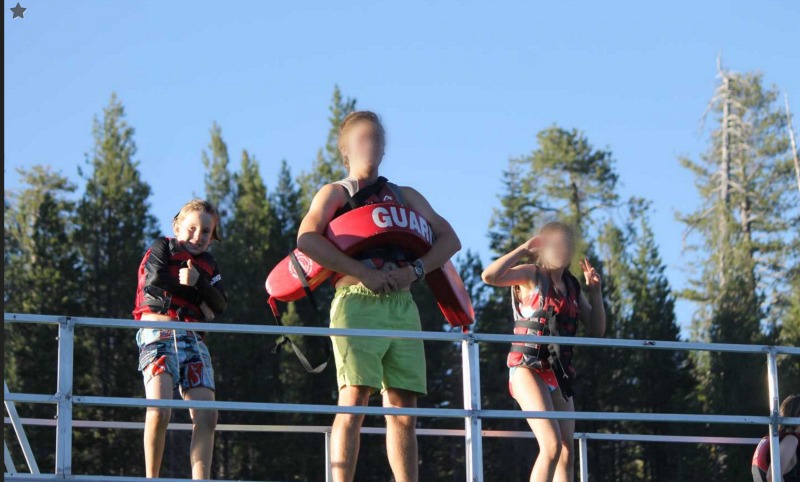 Do you see what I’m seeing? 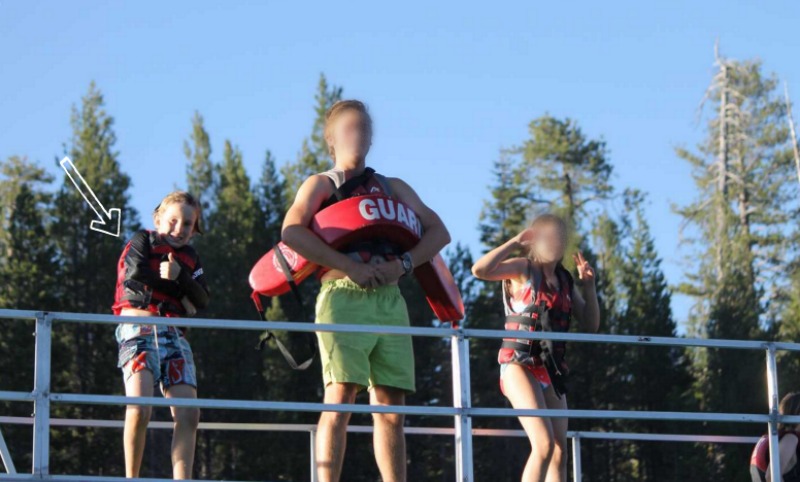 The child is shivering.  I began to fear he’d get frostbite.

I considered calling the camp. Instead, I stress watched reality TV and sent 37 friends an email.  All of them responded, “Don’t look at the photos!” I listened, until the next day.

*Also, it should be worth noting that in each of the photos my child is wearing clothing proving that he can find his own stuff without asking me. I’m going to remember that the next time he’s home and can’t find his shoes, or his hamper.

The next day the camp posted a lovely group photo that nearly had me in my car driving the 5-hours to camp. 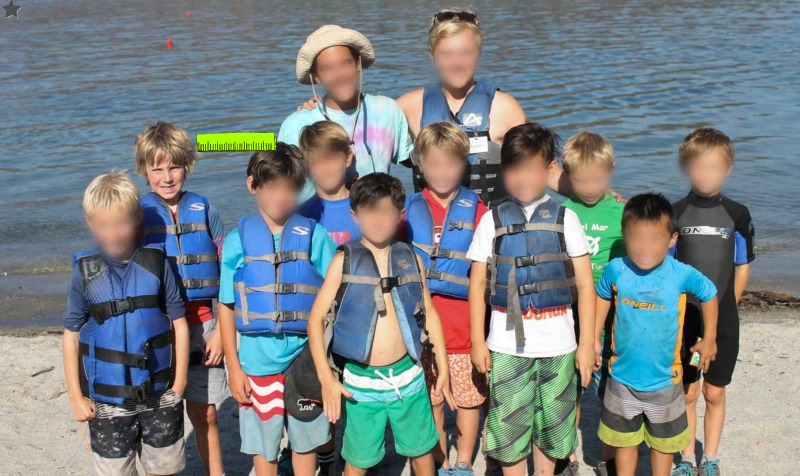 It’s obvious from the photo my kid has had a hard time making friends at camp. There’s more distance between he and the kid standing next to him than there is between any other two kids.  I wondered why the camp hadn’t called me to inform me that my son wasn’t well liked at camp.   I made a note to call them, right after I finished stress re-folding my yoga pants.

Further proof of my child’s clear unhappiness at camp was this gem. 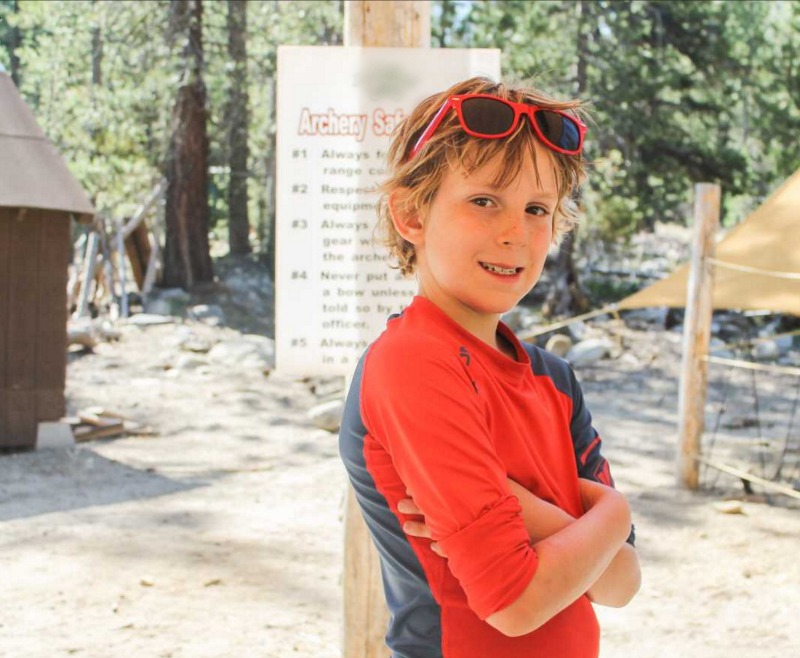 At face value, this looks like a happy camper. But, clearer heads prevailed.  Because you know what is missing from this photo? OTHER PEOPLE!  My child is alone in this photo. I couldn’t help but wonder if that meant he’d been alone all the time.  I considered calling the camp. Instead, I stress scrolled through every other child’s photos for proof that my kid wasn’t the most miserable one.

Everyone else’s child looked happy. I bit my nails down to sandstone and decided to wait until the next day before calling camp.

The next day, our mail carrier delivered our mail early.  On top of the bills and catalogs, was a postcard.  I could recognize my child’s serial killer penmanship with my eyes closed. I gasped a sigh of relief, reached for the postcard, and shed tears of joy.

It read, “Mom and Dad, I made a new friend named Barrett. I love jumping off the pontoon into the lake.  My counselors are sick! (he drew a peace sign next to the exclamation mark.)  Camp is epic. And I can’t wait to come next year.”

I openly wept and put down the phone I was going to use to call camp.  My kid was happy.  He had survived the freezing (probably 80 degree) lake.  He had made it through the 5-hour bus ride (with air conditioning and plush seating.) And he was capable of doing the unthinkable, finding his own stuff.

You don’t know what kind of parent you’ll be until you are one.  For every, “I’ll never turn into a stressed crazy sleep away camp mom,” there’s me, using the skills of a forensics agent to analyze my son’s photos.  I clearly couldn’t be trusted with intel from the front lines, so I logged out and logged off. When it comes to sleep away camp, no news is good news. Ignorance is bliss. Plus my kid was clearly having a great time. It’s time I did, too.