Everywhere we go, someone compliments Margaux on her style.  “Oh, you’re such a fashionista,” a stranger might say noting Margaux’s ability to put two mismatched patterns together, or wear so many accessories she’d never make it through a metal detector without sounding the alarm.  And then there’s the sparkles. And the pink. Oh, there’s always so much pink. If I wore all that pink…

I got to thinking about what would happen if I wore all that pink, and all those sparkles, and knee socks with shorts and sneakers, and 14 bracelets, and two barrettes, and a pink mask, and more pink. Would anyone refer to me as a fashionista as they do her, or would they question my sanity?

Truthfully, I admire that my daughter has no fashion rules except whatever fashion inspiration comes to mind.  I’m just not sure a grown-up can pull off kid fashion with the same style and panache.

Check out some of my favorite moms emulating their little fashionista’s style.  You’ll even see me trying to be as stylish as my little girl. 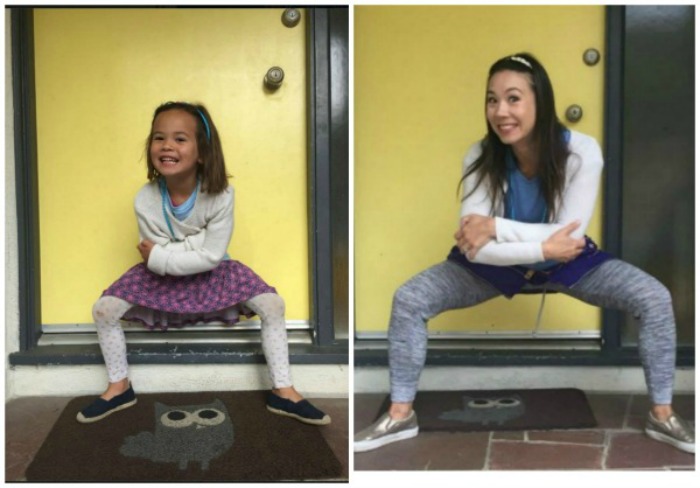 Michelle from Home Made Mimi, is always impeccably dressed. So I figured her 5-year-old daughter would be just as stylish and gorgeous as her mom.  Michelle described her daughter’s style by saying, “Vivi is 5. I’d say her style is Little Orphan Annie meets Shimmer & Shine. She’s big on layering so will do well working weekends at JCrew in high school.”   This had me laughing out loud and could pretty much describe most 5-year-old girls fashion.  Also, I was impressed Michelle could hold her daughter’s position long enough to take the photo. I would have been in traction. 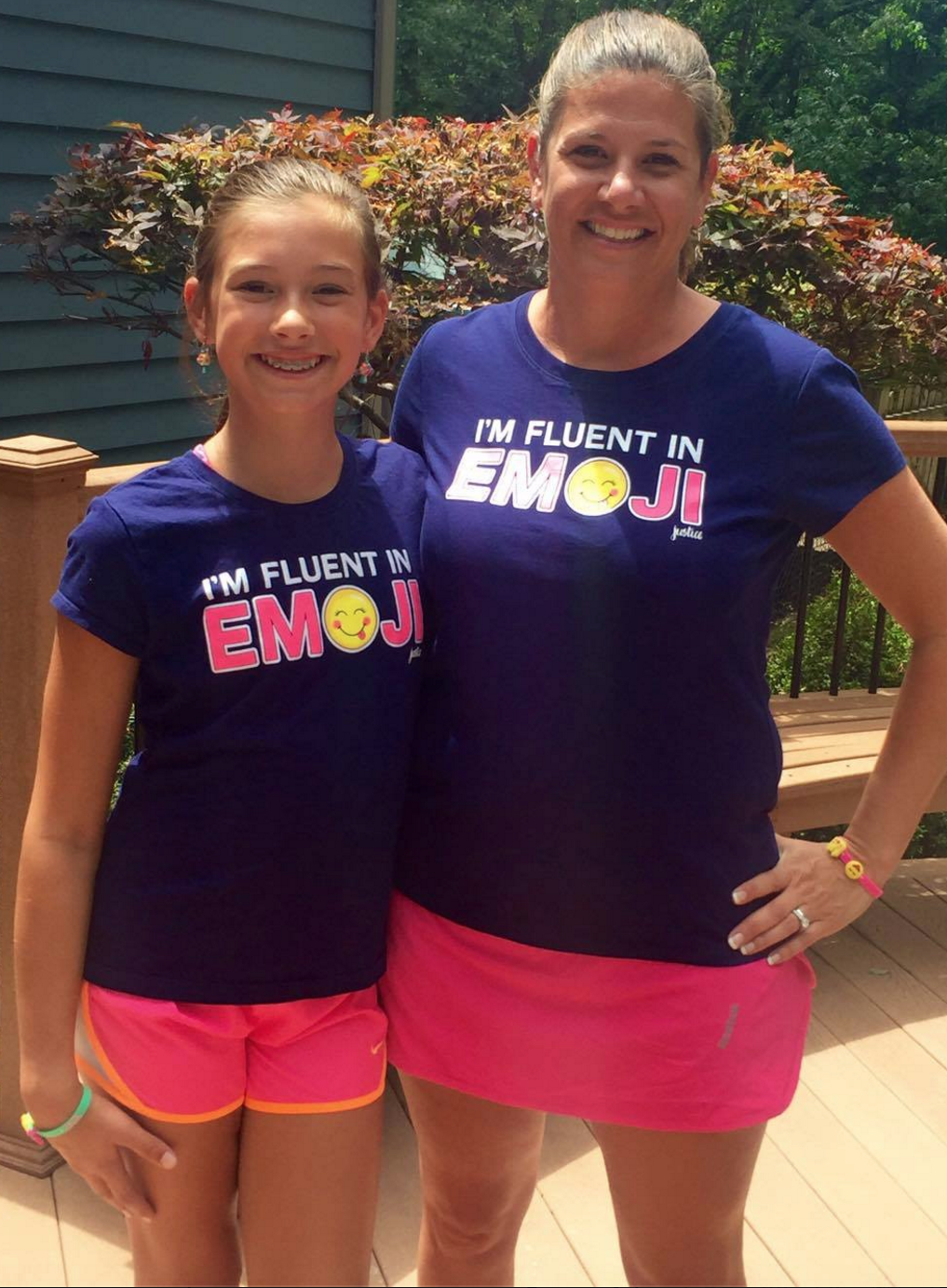 Alyson’s blog The Shitastrophy is one of my must reads. Alyson’s a fantastic writer and is one of the funniest ladies I know. So I knew she wouldn’t be shy when I asked her to try to replicate her daughter Jillian’s style.

Alyson never does anything half way, so she took on the project like a boss and made a special trip to track down her daughter’s “I’m Fluent In Emoji” shirt in her size. And when I asked her to write a few lines on how her daughter dresses Alyson said, “Jillian is 11 years old loves all things neon, athletic, and from justice. Her and her friends love to match.”

Alyson was also quick to note that she had lost all circulation in her legs by the time the photo was taken because her tennis skirt was rolled up and way too small. 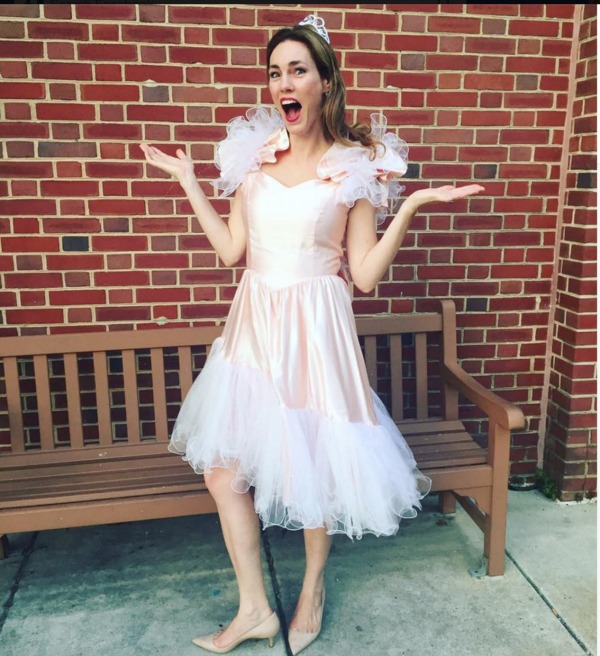 Everybody knows Deva from her viral parody videos that she posts on My Life Suckers.  She’s been on the Today Show, GMA, and her videos are always watched by millions of people. Deva’s kids play a big part in her videos, so I asked her if she might be willing to share a photo of herself copying her gorgeous daughter’s style. Well, if anyone call pull of a princess dress it’s the queen of the Internet, Deva. Honestly, she actually looks good in this!  But one thing I know about one of my best blogging buddies is, she looks good in everything! 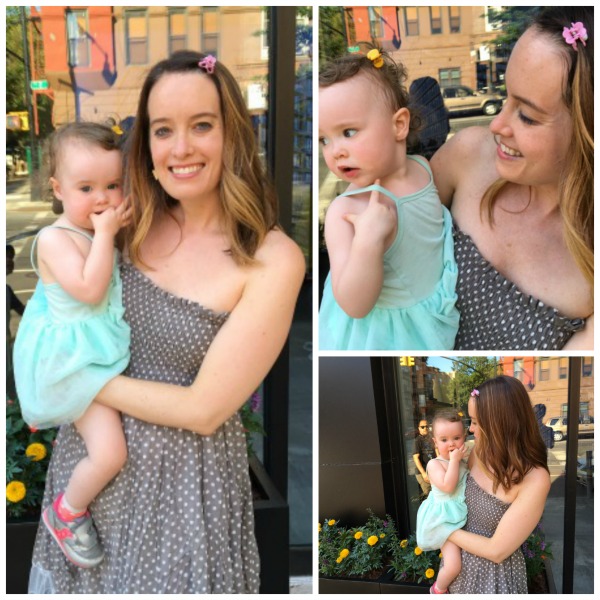 Heather is my editor at Momtastic and she’s the writer behind the awesome blog High Chair Times.  I wasn’t sure if her daughter Poppy Belle was too young to have opinions on her style, but Heather was quick to set the record straight saying, “She definitely has a look.”

Photographing Poppy took two tries, since she wasn’t cooperating the first time according to Heather. I’m not sure what kind of bribery took place, but Heather sent me a whole host of photos. They were so cute, I couldn’t choose just one. And yes, Heather looks that good in a sundress with a kid’s barrette in her hair.   Clearly, the Poppy doesn’t fall far from the tree. 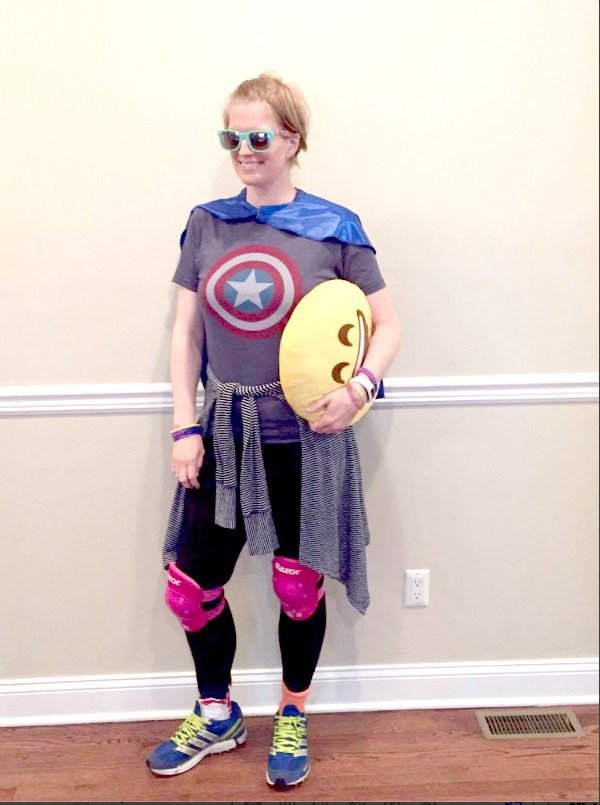 You know the popular senior who was nice to you when you were a freshman in high school? Well that’s Kim, from Let Me Start By Saying, for me. Kim was SUPER nice to me when I started the blog and she’s been gracious and generous ever since. I’ve got serious respect for her, but that didn’t stop me from asking her to potentially humiliate herself by trying to replicate her daughter’s style.

I had to do some serious begging and  play long round of Meredith Annoying Kim. Finally, she relented and sent this hilarious photo. Kim said, “My daughter is 9 years old and yes, this is her typical outfit even when not roller skating.” 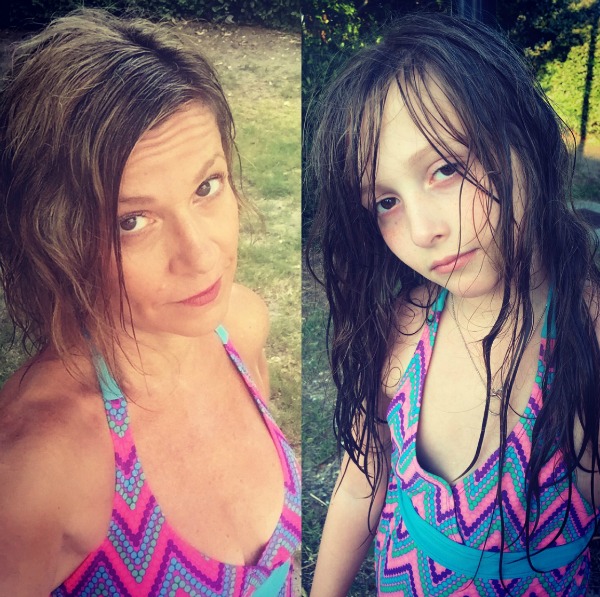 Before I say anything about Lisa from SassyPieHole, it’s important to note that Lisa is wearing her daughter’s swim top. SAME SIZE! Lisa should get some kind of award for that, right?

So when I asked Lisa to send in a photo, I caught her right in the middle of her summer vacation. That did not stop her.  She wrote, “My daughter wears the same two things every day in the summer: a $14 bathing suit from Target that I got on sale three years ago and a fucking attitude.”  Don’t worry Lisa, all of our daughter’s wear the same thing. Especially, the attitude.

Harmony Hobbs is one of the funniest ladies on the Internet.  Her blog, Modern Mommy Madness, is always at the top of my list and her Facebook posts are always epic.  She does not pull any punches and she does it with such good hair.  My kind of gal.

So naturally, I had to ask her to participate thinking this Southern belle would be raising a Southern belle of her own. Well she might be but Harmony describes trying to photograph herself with her unbelievably adorable 3-year-old daughter Pepper as, “a total nightmare.” Sounds like this Southern belle has a mind of her own.  Now, let’s hope she tells us where she got that pink cowboy hat because Margaux will absolutely want one. 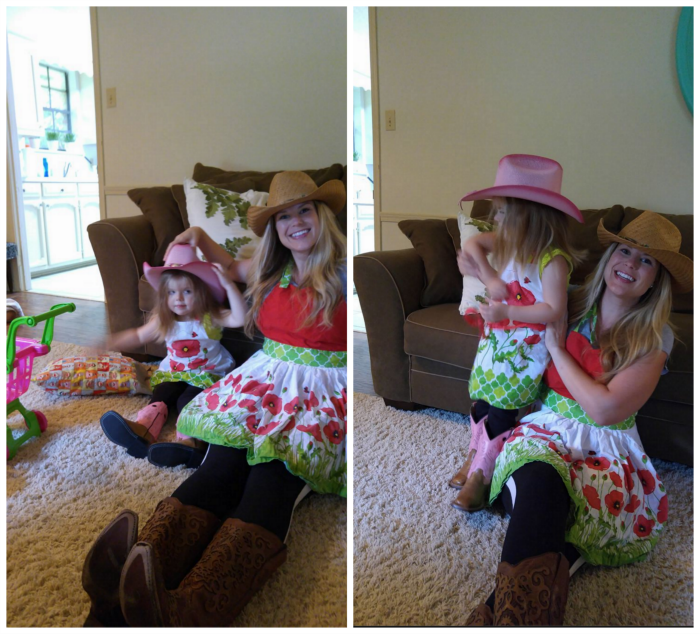 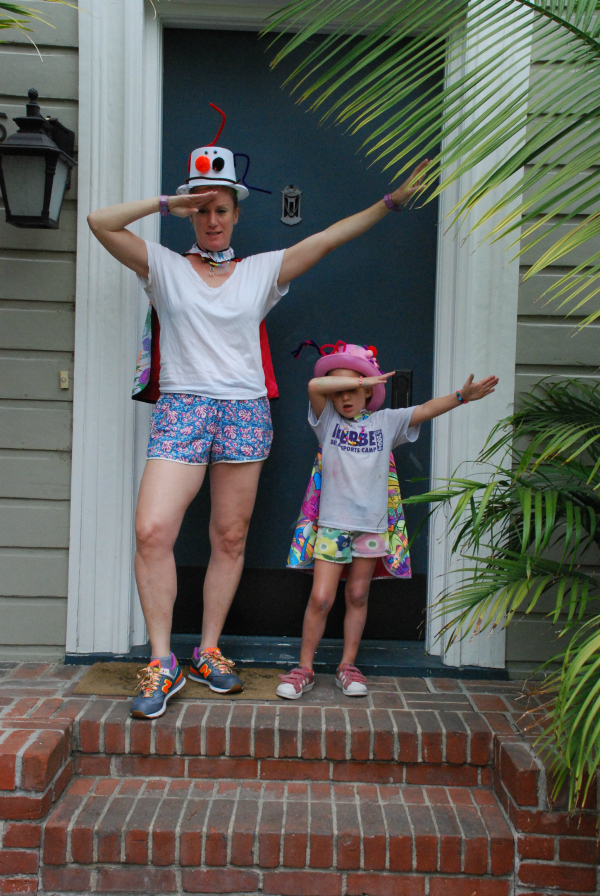 Hi! This is me and Margaux on our front porch the day before we moved out of the house. When I told Margaux I wanted to take a photo of us dressed the same, she went right to work picking out her outfit. Sadly since it was me replicating her style I couldn’t manage the process which would have had me screaming, “Don’t make me take a photo in shorts!”

But if there is one thing Margaux is specific about, it’s style and fashion. She likes to wear her shorts above her navel with her shirt tucked in. And generally, she over accessorizes to the point of being weighted down.  But somehow, she pulls it off. Now if only I could say the same thing for myself.

Thanks to all the gorgeous moms and daughters for contributing their photos. Maybe we need one of dads and sons, no?