There are a few things you’ll need to know about me before we begin.

First, I don’t hate Gwyneth Paltrow. In fact, I resisted joining the dog pile on Gwyneth bandwagon even when it seemed like everyone else was already there. I held out strong making comments like, “Okay so she thinks housewives should by $12,000 mixers, but she’s a fantastic actress,” which I still believe she is.

Then she started singing, which I found annoying. Just because you’re married to a rock star doesn’t mean you and Cee-Lo should duet. Actors should act. And actors who can’t sing, shouldn’t sing. Everyone should stay in their own lane and do things they’re good at, or sing in the shower or car like the rest of us pitchy songstresses. With that in mind, I still stayed in the “Who really cares?” side of popular opinion on Gwyneth.

Then Gwyneth’s Goop website started to publish articles with suggestions for ways to steam one’s vagina or detailed soup cleanses. Then and only then, did I think the haters might be on to something. I couldn’t help but notice that Goop seemed synonymous with “in the pejorative.” The never-ending cleanses under the guise of health didn’t seem healthy to me at all.

With that in mind, I tried to keep my thought bubble kind when it came to Gwyneth. Sure, I’ve spoofed her a bunch of times on my blog. But when you write about vagina steams, you’re kind of asking for it.

If there’s one thing Goop readers know about Gwyneth, it’s that Gwyneth loves to cleanse. It’s unclear why. Possibly she had a childhood incident where she got too much dirt in her intestine, or she’s just lived here in Los Angeles too long. But it’s difficult to deny, Gwyneth does seem food, body, and cleanse obsessed.

I’m not big fan of diets, food trends or exercise trends, but I’m also not above trying something new that doesn’t seem crazy. So I once did a 3-day juice cleanse and then a 5-day juice cleanse a year later. In hindsight, I realize the one reason to have only juice for three or five days straight is to prove to yourself that you hate yourself. There is no other reason. I don’t care what the article in US Magazine said, no human is meant to live on juice alone.

If you’ve ever done a juice cleanse you already know what I found out. Juice cleanses give you the fabulously flat stomach you desire, but that’s because you’ve spent three days alternating between starvation and diarrhea. Sure you can fit into your jeans, but that’s because you’re a day away from kidney failure and dialysis. I didn’t feel cleaner after my cleanse, but I did feel hungrier. And a cleanse always ends with a Twix/Pringles binge that has one back to square one and fat as a house.

So when an article about the new 2016 Goop Detox entered my Internet realm, I figured this was another Goop-style wacky trend they wanted to force upon their readers. I figured the detox was as crazy as the vagina steam. So I read the article, thinking I’d write a post about it. In the spirit of fairness, I decided to try the cleanse before I made fun of it. Plus the holidays left me looking and feeling like a “before” picture for Weight Watchers. So a cleanse, even if it was questionable, couldn’t hurt.

The Prep: After reading through the details of the cleanse I was surprised to see that this cleanse contained actual food. Unlike juice cleanses or soup cleanses, this one at least provided the opportunity to chew. I proceeded with cautious optimism.

It’s worth noting that this cleanse has a long list of ingredients from chia seeds to vanilla protein powder that one might not already have on hand. The Goop detox does not provide a shopping list, at least one that I could find, which would make preparing for the cleanse much easier and less time consuming. There are recipes, but no organized by sections in the grocery store shopping list that might take an hour off of someone’s day. (Mine.)

“That’s okay,” I said to him. “This cleanse will have probably have killed me by then.”

I decided to move on without those ingredients figuring I couldn’t fail cleansing just because I didn’t have shallots.

Halfway through my shopping trip, I considered bailing on the whole thing. I wondered how many people actually ever start the cleanse. You have to buy so many hard to find ingredients, which get incredibly expensive. If anyone is actually successful on the detox, it’s because they were too exhausted to eat anything after trying to purchase the laundry list of random items needed to complete the cleanse.

The Tea: First on the menu each morning is the Surya Spa Detox Tea, which is basically some seeds in hot water. This one confounded me from the start and made me feel like I was a complete cleanse failure. 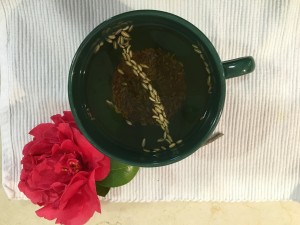 That’s because I couldn’t figure out what to do with the seeds. Was I supposed to drink them? If so, yuck. I’m not a parakeet. I don’t want to eat or drink seeds.

I actually made a different choice: don’t drink the tea. After a few sips of hot water that tasted like black licorice, I pulled the seeds out of my teeth, poured out the remaining tea, and went about my day.

Next up on the menu was the Chia Pudding.

First off, I hate pudding. I hate anything with a creamy consistency, but I was willing to try this one. But while the recipe on the website says the pudding will thicken within a few minutes, mine never did. It remained runny with the chia seeds ever so slightly expanding. Basically, my chia pudding looked and tasted like sweet cat vomit. 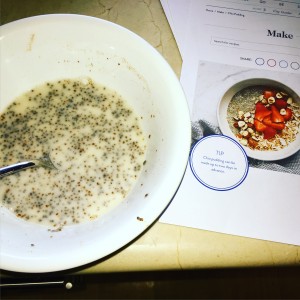 At that point I felt like I was on the detox short bus. The “easy” Goop detox cleanse didn’t feel so easy.

By the time lunchtime came around, I was starving. Fearing I would overeat the 5-Spice Salmon Burgers once they were made, I ate a bag of Sour Cream and Onion Ruffles. Don’t judge. They were fucking amazing. And they kept me from binging on the salmon burger. Okay it might not be how Gwyneth would detox, but I like to be original.

The 5-spice salmon burgers weren’t bad, unless you ask my children who acted like they were being tortured when I served the remaining salmon burgers to them for dinner that night. Clearly my kids don’t read Goop.

I won’t lie. In my mind I equate cleansing with pooping. It just seems like cleanses and detoxes are expensive ways to take a really good shit. And there is no one who values the joy of a great bowel movement more than I do, but cleanses have always seemed to me a very aggressive way to accomplish that euphoria.

I assumed at some point in my Goop detox journey, I’d have the runs. Or, the sprints. But I was pleased to wake up on Day 2, without a Goop-induced case of Montezuma’s Revenge. I did, however, wake up starving.

I tried to make the tea again on the second day. I failed again and still couldn’t figure out what to do with the damned seeds. I’m fairly certain one shouldn’t need to floss after having a cup of tea, but maybe at Goop they do.

Next, I made “GP’s Morning Smoothie.”  On the website the word smoothie is written in quotes. This made me nervous. I like smoothies. I mean, who doesn’t? But the quotes made me think the Goop smoothie was a trick and wouldn’t be as delicious as a Jamba Juice. I was right.

Apparently, the morning “smoothie” is a GP favorite.  Btw: the editors won’t say her name is Gwyneth Paltrow, instead opting to keep her under cover as “GP” as if she’s President Obama being referred to as POTUS. I’m pretty sure, however, the cat is out of the bag. Don’t we all know GP is Gwyneth? Or did I just blow a big secret and tell you Santa doesn’t exist?

Back to the in quotes “smoothie.”

So apparently GP has this “smoothie” every morning, “even when she’s not detoxing.” I figured the smoothie must be delicious if GP drinks it everyday.

For lunch, I had a non-offensive salad (no delicious stuff like dressing or croutons) with some chicken on it because I didn’t have the time to make whatever GP was cooking. To be honest, I was actually a bit exhausted from my day and half detoxing. Not from the lack of food, but from the amount of time it takes to prep, cook and clean up all this stuff. By Day 2, detoxing was starting to feel like a full time job. A very expensive full time job.

In fact, it was starting to feel like the Goop cleanse is really something only a wealthy person with a full staff and endless time on her hands could possibly complete successfully. I had already failed at most parts of the cleanse. I took solace in assuming that I was not alone in my failure.

I had perviously decided to make the Kimchi & Chicken Nori Wraps that evening instead of whatever was on the menu. This was one of the few items that actually tasted good, plus it gave me new respect for any sushi chef who can roll their wraps well. Mine were torn, overstuffed and messy, but they tasted good. Even my kids had them for dinner, minus the kimchi. 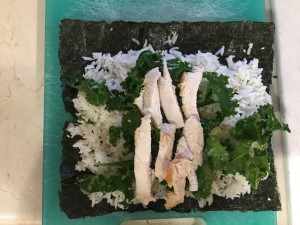 I actually woke up feeling good. I liked the feeling of eating healthy food (minus the chips), but I couldn’t imagine even one more day where my time was so dominated by food.

The 2016 Goop Detox Cleanse made me realize the only thing I really need to detox from was detoxing. And so I packed up my seeds, put away my chia, and tried to remember to eat healthier and cleaner each and every day.

Would I Do It Again?

Hell, no! Who has the time or money to spend all day chopping, puree’ing, heating, and blending? Well Gwyneth Paltrow does, that’s who.

But for the rest of us normal ladies who just want to lose a few pounds or feel a bit healthier, there’s a million ways to do that. I just can’t imagine that spending all your time and money obsessing about food is one of them.

Now, who wants a pantry full of seeds?