I left for our three-week family trip to Europe assuming my kids would do nothing to dispel the rumor that American children, and their mothers, are heathens. My kid’s behavior isn’t particularly good or bad. They’ve got some strong qualities in relation to please’s and thank you’s. And some weaknesses in the areas of meltdowns and fidgeting.

But, it seems like every year there’s another article or book being written about how much better behaved all the world’s children are compared to their feral American counterparts.

So I assumed my kids would do nothing to make that rumor go away.

I pictured Margaux asking for chicken nuggets at the 2-star Michelin restaurant at the top of the Eiffel Tower and all of France unanimously gasping. I anticipated Balthazar trying to play tag throughout the Louvre causing even the Mona Lisa to shudder. And I was sure both would, very loudly, say things like, “This is the most boring thing ever. Can’t we just watch an ipad?” throughout each and every historical site or museum in which we stepped foot. I was certain that no matter where we went my children’s behavior would be met with all of Europe whispering amongst themselves, “Must be American.”

I know I’m not the only American mom cautious about the comparison of her kids to foreign kids. As I boarded the plane I got a text from a good mom friend of mine which read, “Let me know if those European moms are as neurotic as we are, or if they really are so much better.” The only people who face more behavior scrutiny than American children, it seems, are their mothers.

But to my delight, something magical happened in Europe. The children of the world turned out to be just as awful as your children or mine. Sure, Margaux threw a Real Housewives worthy tantrum on the island of Formentera off of Ibiza that had us carrying her out of the restaurant for fear she’d start throwing breakables. But I saw a British boy at the Tower of London poke his infant sister in the face so hard, her parents wondered if she’d lose her eye.

At Versailles, two Spanish tweenagers parked themselves outside the golden gates and wouldn’t join their parents on the tour because they had staged a screen time stalemate and had sat down on the ground to watch their ipads. They weren’t going anywhere their parents asked, unless there was a better wireless connection. 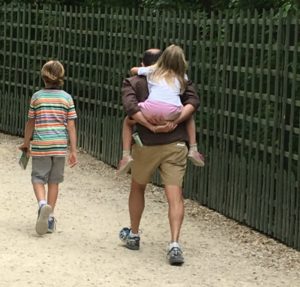 up the hill from the lake to the castle, but at least she wasn’t screaming into an ipad. Everyone knows that if you want to appear negligent and have a lot of parents look down upon your parenting, let your kid watch an ipad in public.

Before we boarded the plane for our last stop in Madrid I considered the notion that maybe all children of the world are terrible, not just the American ones. A sense of relief washed over me. Maybe we American moms weren’t so bad after all. I needed a bit more research before I could really relax and feel smug. I didn’t want to appear over confident. I needed to see some Portuguese kids whine because mom hadn’t carried chilled water for them throughout the day or maybe witness a German toddler throw his food across the room and bark at his mother for a hamburger.

But something happened in Spain that was better than even I could have imagined. While we were waiting for our luggage, a plane originating in Tokyo arrived and its passengers assembled at the luggage carousel next to ours. And there I saw what can best be described as a parenting unicorn: poorly behaved Asian children.

Right there in front of me, two Asian brothers had gone from smacking each other with their neck pillows to fully wrestling on the ground of the terminal. Their mother had already surrendered and was past asking them to stop. She was into the next step of discipline, one every mother goes through. She was pretending like she didn’t know them.

The reason why this was such a thrilling sight to see, was because Asian children are the parenting gold standard. They excel, or so I thought, in everything including behavior. To see two so poorly behaved felt like Manna from heaven. It was as though God was giving me a sign.

An immediate sense of joy filled my body as I watched one brother sit on top of the other one and attempt to spit directly on him. If Asian mothers can’t keep their perfect children together than certainly no one can expect me to. I spent the next ten minutes watching in delight as these kids made the rest of us look good, even we Americans.

At the time my kids were practicing doing wheelies with our luggage cart, but neither were spitting or making the other bleed. They weren’t that bad. I hugged each and said, “Thank you for sometimes not being awful.”

There are a lot of reasons to travel with your children. They get to see the world. They get to step out of their comfort zone and try new things. They get to experience other cultures and try to adapt. But parents traveling with their children are really the big winners. That’s because we get to see that children are awful no matter what country we’re in. Bad behavior knows no boundaries. There is no country parenting better.

Trust me, I know.